WHAT WILL THE SUPREME COURT DO?
Here is a Link that Reports SCOTUS Actions
https://certpool.com/conferences/2021-02-19 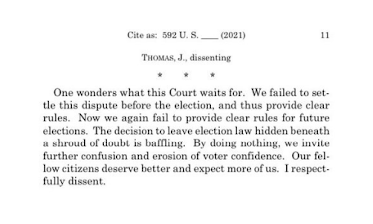 On 19 February 2021 the Supreme Court will consider granting Certiorari (accept the cases onto its docket) for several of the pending presidential election fraud cases, including the cases brought by Sidney Powell and Lin Wood.  These include the Georgia and Pennsylvania cases.  If 4 of the 9 justices agree to accept the cases then the Court must hear them.  If 5 of the 9 agree with the plaintiffs that massive election fraud occurred then the remaining question is what remedy will the Court impose. The Court can refuse to consider the cases (if no justice want to discuss the case, it is automatically dismissed under Rule 46), grant immediate Certiorari or request a BIO, a Brief in Opposition, and consider the request for Certiorari later.

There is a scenario in which D. J. Trump may still return to the White House in triumph.

But to understand how, we need to start in 2018 when Chief Justice Roberts wrote the Opinion in the case of Abbott vs Perez. [1]  This was a Texas electoral fraud case in which, as we have also seen this year, the trial courts refused to hear any evidence of fraud. When the case got to the Supreme Court the Chief Justice wrote that the Court could determine whether there had been fraud, or not, even in the absence of evidence presented in the courts below, by taking judicial notice of the actual voting statistics which are part of the public record.  The court does not need to know the who or how of the fraud to determine whether or not there was fraud. In the Perez case the Court looked at the voting records and decided there had not been fraud.

This means if the Court decides to take on the presidential election fraud cases, those cases can proceed rapidly to a decision based on the public record of anomalous shifts in the votes among the candidates in the "key states."

That there were anomalies is widely accepted:

"This report studies 8,954 individual updates to the vote totals in all 50 states and finds that four individual updates — two of which were widely noticed on the internet, including by the President — are profoundly anomalous; they deviate from a pattern which is otherwise found in the vast majority of the remaining 8,950 vote updates…" [2]

However, it will be up to the Court to finally determine the outcome of the 2020 election.  Assume that 5 justices decide there had been fraud.  What is the proper remedy?

In that case there was no president after January 20th, and no vice president either.  That has two astounding results.

First, the Speaker of the House would be Acting President. The Senate would be divided 50/50 with no presiding officer to cast any tie breaking vote.

Second, the choice of president falls to the House which under the Constitution has until March 4th to choose a president from among the top electoral vote getters.  Each state gets one vote. Since the Republicans have a majority of the state delegations to Congress, they can easily choose Trump.

After that date the office would be vacant and the new president would have authority under the 25th Amendment to the US Constitution to nominate a vice president, subject to Congressional approval..

And that is how Nancy Pelosi might end up as Acting President for a few weeks, succeeded by the once-and-future President Trump.

[1] I wrote about the Perez case here:  https://vitaminlawyerhealthfreedom.blogspot.com/2020/12/was-2020-election-legitimate.html

Posted by Health Freedom of Choice Blog at 4:07 PM