Analysis of Martial Law, the US Constitution and COVID-19

COVID-19, MARTIAL LAW AND THE US CONSTITUTION 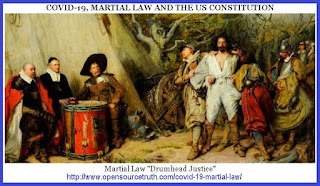 Martial Law is “the imposition of direct military control of normal civilian functions by a government, especially in response to a temporary emergency such as invasion or major disaster, or in an occupied territory.”[1]

There are powerful political forces centered on the World Health Organization (WHO) and its multi-billionaire ‘benefactors’, such as Bill Gates, currently calling for the imposition of what can only be called Martial Law to “control” their declared COVID-19 pandemic, the alleged “novel” coronavirus which, it is said, originated in Wuhan, China.

This despite the fact that evidence points sharply to its creation in South Carolina via US Government funding and subsequent sale to China and direct scientific support in Wuhan’s Level 4 Bio Security Lab by US scientists.

COVID-19 may be novel, but the Founders of the United States of America had considerable familiarity with Martial Law.

The King of England’s military occupied American cities and subjected patriots to summary “justice” without due process of law.  The Declaration of Independence singles out the imposition of Martial Law among its catalogue of the King’s abuses that justified American independence: the King made “the Military independent of and superior to the Civil power...”[2]

Having experienced the horrors of summary and hostile ‘justice’ under Martial Law, it is not surprising that when it came time to write the Constitution limiting the powers of the new central government there was no provision in the Constitution permitting Martial Law.

There is, in addition, a further legal principle that limits Martial Law in the United States: the universal right of Informed Consent.  I have written extensively on this topic.[3]  Simply put, the individual right to bodily integrity absolutely trumps any forced medical treatment.[4] Vaccine mandates under Martial Law come within the purview of the Nuremberg Code, which, as a result of World War II, the Nuremberg Trials and the Geneva Conventions, are not only international treaty law, but US law as well, limiting the military power of governments, including the US government, to mandate medical interventions against subject populations.  Assert your right here:  http://drrimatruthreports.com/advancevaccinedirective/

You have the right to refuse Informed Consent even if you are under Martial Law.[5]

Late last month as part of the COVID Emergency Health Summit[13] I interviewed constitutional scholar and lawyer, Larry Becraft, JD (considered by many to be The Dean of the Patriot Lawyers). In that interview[14] we discussed the possibility and legality of Martial Law as a response to the declared pandemic. This article is based on that discussion and subsequent research.

Since there is no provision in the Constitution allowing Martial Law, how did President Lincoln seek to impose Martial Law?[15] How did President Wilson do so? How did FDR do so, going as far as incarcerating hundreds of thousands of American citizens of Japanese origin, for years?[16] Congress failed abysmally to protect our rights, that’s how.

While there is no clause in the Constitution allowing Martial Law, there is a clause limiting it.

That is the Habeas Corpus clause. The section reads:  “The privilege of the Writ of Habeas Corpus shall not be suspended, unless when in Cases of Rebellion or Invasion the public Safety may require it.”[17]  The “Writ” is a judicial process by which a Judge can examine why an agent of government may or may not have authority to imprison a person.  Martial Law, without suspending the Writ, would not render “the Military... superior to the Civil power.” Note also, the clause expresses only two specific grounds for suspending the Writ, and then only when “public safety” may require.  It does not include circumstances of contagion, although the Founders were familiar with repeated outbreaks of very serious diseases. Expressio unis est exclusio alte (Expressing the one this, excludes the other).[18]

This clause is part of the Constitutional Article on the powers of Congress and acts to limit any congressional power permitting the President, as Commander in Chief, to impose Martial Law. In any event, this clause, like the rest of the original Constitution, was amended by the Bill of Rights. Therefore, whatever power Congress or the President have in this area is limited by the First Ten Amendments, including the right to keep and bear arms, and all of the other protections of the Bill of Rights.

President Trump, so far, has carefully avoided imposing Federal dictates on the States during the declared pandemic and his National Emergency Declaration.[19] Rather, as seen during his nightly television appearances, he defers to the State Governors to impose restrictions and take the other steps catalogued at the beginning of this article.  He has correctly implied that the President does not have the power to close state schools, public accommodations, businesses and the like. Instead, the State Governors, issuing their own Emergency Regulations under the plenary police power of the States, have imposed restrictions that look a lot like Martial Law.

We know from the Civil War era Ex parte Milligan case (cited above) that “martial rule can never exist when the courts are open.”  Therefore we are particularly concerned that the courts in many areas are not open.[20]  The Department of Justice is apparently seeking Congressional approval for emergency powers that would, in effect, suspend the Writ of Habeas Corpus, as though the country were in a state of rebellion or invasion (by a foreign power).[21]

Piecemeal Martial Law is being imposed state-by-state, while the court systems are engaging in self-isolation.  We are faced with a “perfect storm” -- perhaps leading to world-wide mandatory COVID vaccinations in just a few months, while elders and people with serious medical conditions suffer from a declared pandemic, and much of the world economy has been stopped by government fiat.

While Martial Law has no Constitutional authority, we certainly seem to be in a condition of Martial Law and it is only likely to get worse unless Americans assert their right to go about their normal business without harassment by over-zealous public officials.

When all is said and done the death rate in 2020 will be little different from the death rate the year before, unless economic collapse accelerates. That people are dying “with COVID” is not the same as people dying “from” COVID.  Keep that distinction in mind as you seek to discern truth from government and its media disinformation in a time of declared plague.

I continually post updated information at www.TruthAboutCoronaVirus.com  and urge you to visit often and share it on social media as widely as possible.

---------------------------------------------
[1] https://en.wikipedia.org/wiki/Martial_law
[2] https://www.archives.gov/founding-docs/declaration-transcript
[3] http://www.inhere.org/wp-content/uploads/2020/01/Informed-Consent.paper_.1a.pdf
[4] Even a “…diminished expectation of privacy does not diminish the… privacy interest in preventing a government agent from piercing the… skin. And though a blood test conducted in a medical setting by trained personnel is less intrusive than other bodily invasions, this Court has never retreated from its recognition that any compelled intrusion into the human body implicates significant, constitutionally protected privacy interests…” Missouri vs McNeely, 569 US 141, 15 (2013)
[5] http://drrimatruthreports.com/advancevaccinedirective/
[6] https://www.nj.gov/governor/news/news/562020/20200402c.shtml
[7] http://www.opensourcetruth.com/unnecessary-blue-state-lock-down-imperils-us-all/
[8] https://nypost.com/2020/03/23/pennsylvania-gun-shop-loses-fight-to-stay-open-amid-coronavirus-crisis/
[9] http://www.opensourcetruth.com/can-the-usa-survive-the-plannedemic/
[10] http://www.opensourcetruth.com/can-the-usa-survive-the-plannedemic/
[11] https://nypost.com/2020/03/26/hospitals-weigh-universal-do-not-resuscitate-orders-for-coronavirus-patients/
[12] https://www.sgtreport.com/2020/03/mnuchin-promises-unlimited-liquidity-from-the-federal-reserve-the-us-treasury/
[13] http://www.TruthAboutCoronavirus.com
[14] https://www.youtube.com/watch?v=pkRl7sQRTkg
[15] “Ex parte Milligan, 71 U.S. 2 (1866), was a U.S. Supreme Court case that ruled the application of military tribunals to citizens when civilian courts are still operating is unconstitutional. In this particular case, the Court was unwilling to give President Abraham Lincoln's administration the power of military commission jurisdiction, part of the administration's controversial plan to deal with Union dissenters during the American Civil War. Justice David Davis, who delivered the majority opinion, stated that "martial rule can never exist when the courts are open" and confined martial law to areas of "military operations, where war really prevails", and when it was a necessity to provide a substitute for a civil authority that had been overthrown.” https://en.wikipedia.org/wiki/Ex_parte_Milligan
[16] The Supreme Court recently opined that the Japanese Exclusion was “gravely wrong” when decided and not precedent for future legal decisions. https://www.washingtonexaminer.com/policy/courts/supreme-court-overrules-1944-japanese-american-internment-case-in-travel-ban-decision
[17] www.usconstitution.net/xconst_A1Sec9.html
[18] https://definitions.uslegal.com/e/expressio-unis-est-exclusio-alte/
[19] https://www.whitehouse.gov/presidential-actions/proclamation-declaring-national-emergency-concerning-novel-coronavirus-disease-covid-19-outbreak/
[20] https://www.uscourts.gov/news/2020/03/12/judiciary-preparedness-coronavirus-covid-19
[21] https://www.politico.com/news/2020/03/21/doj-coronavirus-emergency-powers-140023
Posted by Health Freedom of Choice Blog at 10:57 PM No comments: