Was the 2020 Election Legitimate? 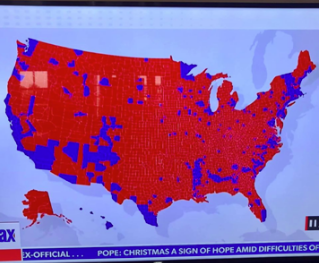 How can we trust the 2020 election results?  The Supreme Court, in 2018, showed us the legal process.

In 2018 Chief Justice Roberts wrote the decision in the Texas redistricting case of Abbott vs Perez, holding that the Supreme Court could take judicial notice of official voting results statistics to determine whether or not fraud had occurred.  In that case the statistics showed no fraud.  The same principle could be applied to the current situation, if any of the pending cases are accepted by the Court, confirming massive vote fraud and invalidating certain key state electoral votes.

Whether we can trust the vote will depend on the courage of at least 5 members of the Court.

On a personal note, I voted for the Libertarian Party (candidate: Dr. Jo Jorgensen) as I have for the past 40+ years, nonetheless, it is clear to me that the claimed outcome of 2020 election, unless Congress or the Supreme Court intervene, is not legitimate due to massive fraud.

The following is from an unverified source, posted on social media.

In addition to hundreds of thousands of falsified vote dump ballots for Biden in the wee hours in the swing states, election officials counting truckloads and suitcases of secret ballots for Biden, the Dominion vote tabulators were programmed to give an approx. 26-30% advantage to Biden. Each Biden vote counted 1.26 and each Trump vote counted .74, they thought that was enough to swing the vote in Biden‘s favor it was not... 

Here’s a couple other huge statistical red flag anomalies that just don’t add up. Biden allegedly received 80M votes, more than any candidate in US history, but only  won 17%, 523 of the counties in the country . In 2012, Obama won  873 counties and received 63M votes? See 2020 color precinct map, the blue guy won? Trump has nearly 90 million followers on Twitter  but only got  73 million votes.  Biden has 19 million followers on Twitter but got 80 million votes

In the 20 bellwether counties in Arizona, Florida, Michigan, North Carolina, Pennsylvania and Wisconsin that typically forecast a presidential election, Trump won 19 of them across these states, yet Biden still won?

In the swing states, Trump was up on election night 5-10%, hundreds of thousands of votes in each of those states. Then we went to bed believing Trump had won reelection. However, in the early morning hours, between 3-3:30am, on the day after the election, Nov. 4, when election counting centers were supposed to be closed, there were inexplicable, coordinated, sharp vote dumps/spikes on the counting graphs in amounts seemingly calculated to catch Biden up. In Michigan, the vote spiked 141,258 for Biden, 5,968 for Trump , in Wisconsin 143,379 for Biden, 25,163 for Trump, in Georgia 136,155 for Biden, 29,115 for Trump, same in Michigan and Pennsylvania. See Navarro vote change chart and vote spike graph, clear evidence of fraud.

One more interesting fact, in these same states, voters elected republican senators, house members and other down ballot candidates, but not the leader of the Republican party, President Trump?

The swing state Legislatures and now congress are hearing compelling, overwhelming evidence of election fraud and security failures, Congress, or SCOTUS must decide this election.

Trump has Three primary pathways to reclaim this election that he actually won  by a landslide...

1. When the electoral votes go to Congress one member of the house and one member of the senate must object to the swing state votes. That is followed by a debate/discussion on the house floor and then a vote regarding which set of electors votes get counted democrat or republican, or not counted. Each state delegation has one vote in the house; there are 26 clearly red states, five purple states in 19 blue states. Trump wins;

2. There are numerous cases making their way to SCOTUS, or in the house themselves that could result in a determination that the swing state votes should be disqualified. If no candidate gets 270 electoral votes, the vote for President of the United States is decided by the House of Representatives     . Again, each state delegation has one vote in the house, there are 26 clearly red states and five purple states in 19 blue states. Trump wins;

3. It is likely in the DNI investigation into foreign election fraud and the various FBI investigations into the Biden family, that there is evidence of financial, influence peddling, treason, voting fraud and other criminal wrongdoing and compromised to China, by the Bidens  . I suspect Trump and others know this. Biden’s transition and security briefings have been halted. Kamala has still not resigned her Senate seat. Biden may likely be confronted with the choice to concede the election, or be criminally prosecuted. Joe will fold like the house of cards that he is to save his family.

Truth will out...God Bless the USA 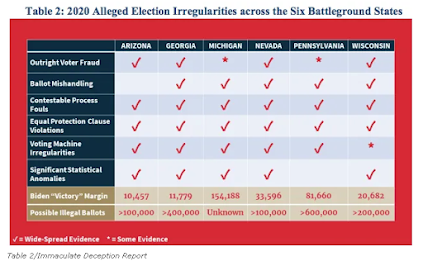 Posted by Health Freedom of Choice Blog at 11:26 AM No comments: