Ralph Fucetola JD states as though under Oath:

2     I am a retired Attorney-at-Law and hold a Juris Doctor Degree. I practiced law from 1971 through 2006 in New Jersey and am a Notary Public.

3     In determining regulatory standards for producing a List of Pre-Dietary Supplement Health and Education Act (DSHEA) Dietary Ingredients (herein, the Pre-DSHEA List), the Food and Drug Administration should, among other factors, consider the relationship of the ingredient to the normal structure and function of the body.

4     Any substance or compound that was part of the food chain on the DSHEA “grandfather” date in 1994 (and not thereafter chemically changed) should be included by reference in any Pre-DSHEA List as such substances or compounds are “grandfathered” by the explicit terms of the Statute.

5     Such substances or compounds, at a minimum, should include all substances found naturally in mammalian, including human, bodies, including compounds produced by such bodies.

6     An example of a substance or compound actually produced by mammalian, including human, bodies and therefore part of the food chain to be considered “grandfathered” and part of any Pre-DSHEA List is Cannabidiol, or CBD.

7.     This substance or compound is also found in the hemp plant and other sources. It is not an intoxicant. It is a human neurotransmitter and a normal part of the cannabidiol neurotransmitter system in the human body.

8.     In 1995, while I was in practice as an Attorney-at-Law I was retained by the Life Extension Foundation to represent two of its members who had been arrested in New Jersey when importing DHEA (dehydroepiandrosterone) a hormone which is a normal part of the human body.

9.     It was believed by the New Jersey authorities that the DEA (Drug Enforcement Administration) had “scheduled” DHEA as a controlled substance. That belief was false. No such “scheduling” had occurred or could occur. Eventually the charges were dropped and an order was signed determining that DHEA was a normal part of the human body, not declared “contraband” by government authority. A copy of the Order closing the cases is posted here: http://www.lifespirit.org/dheaorder.JPG

10. It is my professional opinion that a substance or compound, native to mammalian, including human, bodies, and not being an intoxicant, is a Pre-DSHEA Dietary Ingredient and should be included in any such Pre-DSHEA List.

11. It is my professional opinion that Cannabidiol (CBD) is such a substance or compound.

I certify that the statements made by me in this Comment are true and accurate to the best of my knowledge and belief. I recognized that I am subject to punishment as for perjury if any are willfully false. 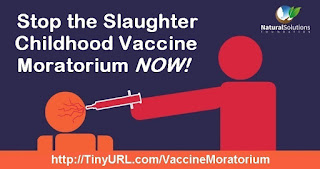 These past several years, across the so- called Civilized World, from California to Italy; from France to Australia, alleged democracies are adopting draconian laws to force parents to vaccinate their children against their wishes and beliefs.

Initially, decades ago, laws were adopted requiring a limited number of childhood vaccines as part of public school attendance. All these laws allowed doctors' medical excuses for individuals who were, in the words of the US Supreme Court, "not fit subjects for vaccination..." (Jacobson v Massachusetts, 1905). Nearly all allowed religious and or other conscientious exemptions.

In the middle of the 20th Century the international law of Informed Consent, developed in response to horrendous violations of the dignity of the person during World War II.

“The voluntary consent of the human subject is absolutely essential. This means that the person involved should have legal capacity to give consent; should be so situated as to be able to exercise free power of choice, without the intervention of any element of force, fraud, deceit, duress, over-reaching, or other ulterior form of constraint or coercion; and should have sufficient knowledge and comprehension of the elements of the subject matter involved, as to enable him to make an understanding and enlightened decision.” (the Nuremburg Code)

The roots go back much further, to case law holding that a physician who engages in a medical intervention without the Informed Consent of the person commits an assault and battery (Schloendorff v. Society of New York Hosp, 1914).

As recently as 2013 the US Supreme Court (Missouri v McNeely) reiterated understanding of the law: even a “…diminished expectation of privacy does not diminish the… privacy interest in preventing a government agent from piercing the… skin. And though a blood test conducted in a medical setting by trained personnel is less intrusive than other bodily invasions, this Court has never retreated from its recognition that any compelled intrusion into the human body implicates significant, constitutionally protected privacy interests…”

For reasons about which we could speculate our elected representatives have forgotten these salutory limits on their authority.

It started in California where a measles outbreak triggered among the vaccinated became the excuse for a new law, SB277, which conditioned attendance at school upon receiving dozens of vaccines, with no religious or philosophical excuse allowed. Gov. Jerry Brownshirt signed the bill although the California Constitution guaranteed a "free public education" to each child. Apparently lawyer Brownshirt had never heard about "unconstitutional conditions" -- making someone surrender one right to gain another.

And the ball began to roll. Australia adopted a law conditioning child financial benefits on vaccination, with only medical excuses allowed. For many families the choice became having food on the table or vaccine-free children. This law was adopted despite clear constitutional language protecting the universal right to Informed Consent.

More recently both Italy and France have seen forced vaccine laws, met in Italy with mass demonstrations against the new requirements. 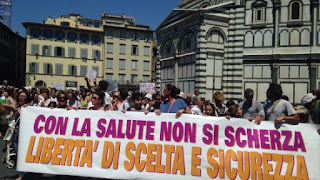 People across the world are rejecting these requirements and asserting their rights to Informed Consent -- http://tinyurl.com/AVDcard.

So now the vaccine enforces have raised the ante again. The Australian Government just introduced a law, with the full support of the "Opposition," making it "child abuse" to refuse to subject your child to what courts around the world have called "unvoidably unsafe" vaccines. Doctors in Australia who are issuing medial exemptions are having their licenses suspended.

Around the world it goes. The power of the vaccine pushers appears to be acendant, but, in reality, what is happening is that the opposition to forced vaccination is growing so rapidly that the Government-Pharmaceutical Complex is forced to move to ever more draconian measures to enforce the vaccinate-at-any-cost policy.

As the science becomes ever more clear, that vaccine-free children are significantly healthier than vaccinated children, the profit-driven urgency of the vaccine pushers becomes ever more desparate. That is why the recent call for a Five Year Childhood Vaccine Moratorium has been met with such feined horror, with nations like China (the world's #1 vax toxin producer) cheering on Australia's recent decsions to ban vaccine freedom campaigners from traveling to Australia, as threats to "public order."

The globalists push back hardest just before their anti-freedom policies collapse.

Push back against the vax pushers by demanding the Five Year Childhood Vaccine Moratorium here: http://tinyurl.com/VaccineMoratorium

What will that accomplish? When implemented it will save at least 250,000 children in the USA alone from developing autism, and over 15,000 babies dying from "Sudden Infant Death Syndrome" -- SIDS, another name for vaccine injury. And that's five years worth fighting for.

Posted by Health Freedom of Choice Blog at 9:59 AM No comments: