I am neither a racist nor a white supremacist, though I am proud of my Caucasian roots; we are the great civilizers of the Western World. I am however an enthusiastic member of the often misrepresented alliance of independent men's clubs known as the “Proud Boys” (which has a lot in common with traditional American patriot groups from the 1700's, such as the Sons of Liberty, who were similarly both a hard-drinking fraternal organization and a political movement -- they weren't drinking tea before the Boston Tea Party).

I am heartedly tired of the miss-characterization of this and similar groups. Hence, this essay.

The Big Lie propaganda technique was perfected by the Nazis and the Communists, and brought to modern American politics by Saul Alinsky's Rules for Radicals.

Repeat the lie often enough, said Hitler, and the "masses" will believe it.

The Soviets were masters of this vile art as well, and we see it in play as the CCP denies genocide against Chinese Muslims while carrying it out, in plain sight.

When the Big Lie is attached to the Alinsky dictum that the strongest propaganda is to personalize the conflict -- not a conflict of competing ideas, but rather, an ad hominin attack of character assassination and disinformation -- you know the fix is in...

These are the techniques being used by such Deep State shills as Antifa and the Democrat Left. American nationalists, conservatives and libertarians are the target.  The Big Lie is that anyone to the right of the extreme left is a "White Supremacist" -- a very convenient label to demonize the opposition to growing Deep State tyranny.

Why the amount of melanin in one's skin should have anything to do with the value of one's ideas is a canard that only a Marxist CRT drone could parse.  In classic Marxism ideas had no validity beyond the "class" holding them  In modern CRT "race" is substituted for "class." Same intellectual dishonesty.

Libertarians point out that collective nouns such as "race" or "class" are not capable of holding ideas.  Only individual humans think, plan and engage in human action, as the 20th Century's greatest philosopher of liberty, L. von Mises, noted. Reasonable humans judge ideas by their content, not by the "race" or other irrelevant, artificial category that may be applicable to the expresser of the ideas.

To elevate "race" or "class" or similar above individual thought is to make the same grave error as the Nazis and the Communists.  Their failure to perceive the reality of human action is why humanity has decisively rejected both forms of socialist ideology.

Let's apply this analysis to the recent attempt by the Deep State Left to label everyone who disagrees with their attempts to consolidate their illegitimate power as a "White Racist" or "White Supremacist."

A good example is the way the corporate mass media continually mislabels groups like the Proud Boys.

Just look at any Google Search. 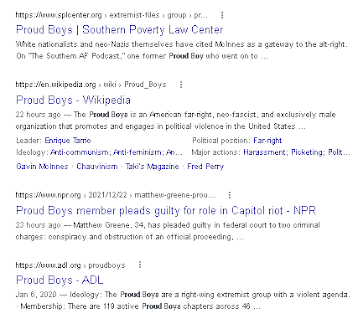 The same propaganda terms are repeated over and over by various Deep State fronts such as ADL and SPLC.  They "know" the real beliefs of the Proud Boys although the PBs state, in their own foundational documents, clear opposition to racism.

The "logic" behind this is something like: 'These White Racists are not proud of their beliefs so they express the opposite.  We know they are racists although they seek to recruit members without regard to race, religion, ethnicity and adult sexual preference.'

Only propagandists could come up with the Big Lie that the PBs are racist although they publicly proclaim they are not. While the Left may be that devious and duplicitous, hiding their beliefs to trick people into blindly following them, the PBs are proud to stand for what they believe.

There would be no reason to pretend, no benefit to lie.  The very purpose of the members is to express precisely the beliefs they profess, not hide them.

Of course Truth has nothing to do with the Big Lie.

In deed the more preposterous the lie, as Hitler noted, the more ready the "masses" are to believe it. He was, of course, wrong about the nature of humanity and the total collapse of both nationalist and internationalist socialist ideology proves that.

Now, though, we face the danger of a resurgent collectivist ideology, championed by a globalist elite, that seeks to categorize and divide humans so as to maintain the system of fake ideas and fiat money that only serves the increasingly perverse desires of that elite.

Although labeled as evil nationalists and supremacists around the world the real humans on this planet, those who are calling themselves the Unvaccinated, the Awake, the Resistance, or the "Pure Bloods" (of every ethnicity, religion and race) have taken to the streets in unprecedented numbers, earlier this year every other month and more recently every Saturday, to resisted Lockdowns, Mandates, Medical Tyranny in all its forms. 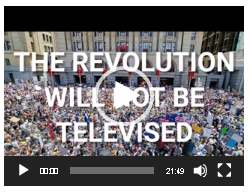 The Proud Boys are just one example of the Human Supremacists who are resisting the dehumanization we have all faced over the course of the Declared Pandemic.
They stand courageously for a program of traditional liberty and are willing to risk their freedom to preserve our liberty. That dozens of Proud Boy leaders are now prisoners of conscience, prisoners of war, since the false flag deep state coup of 6 January 2021 proves that. 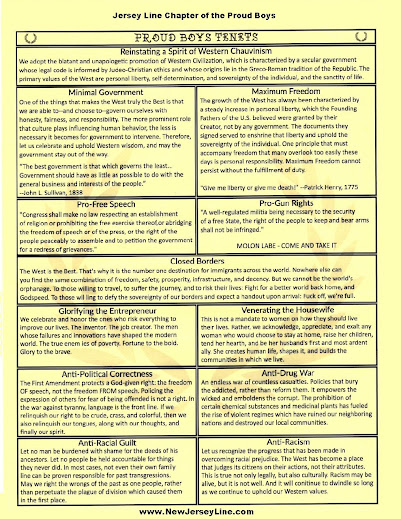 Posted by Health Freedom of Choice Blog at 2:29 PM No comments: