A Clear Majority of Americans
Ready for a Major Third Party
http://tinyurl.com/ThirdMajorParty

At the beginning of 2013 I analyzed the potential for a broad-based third party in American politics [1], taking as my model the extraordinary, albeit temporary, 2008 coalescence of third parties engineered by Dr. Ron Paul [2]. I also considered the Gallop Poll that, for decades, has asked whether a third major party was supported by the voters:

For generations Americans were taught that the “two party system” was a necessary part of American politics. And a strong majority always supported the “system.” The cross-over point was 2006/07.

This occurred as the TEA Party coalition came together and gave the (G)OP control of Congress; since then, a majority has always wanted a third major choice. Considering the cost of launching another third major party, I urged the formation of Liberty Electoral Alliances among the existing third parties…

But first, back to Ron Paul and the top unreported political action of 2008. I wrote then:

“In a significant breakthrough for the American political system, what Dr. Ron Paul has called the "principled third parties" have challenged the US "two party" oligopoly, calling for a restoration of the constitutional republic and rejecting the US empire.

The statement was jointly written by Dr. Paul and the four third party campaigns for President … [Libertarian, Green, Constitutional, Independent]. The Statement challenges the "two" tax-supported party system which has dominated US politics in recent decades and rejects the joint policies of the Democrats and Republicans that, in this blogger's opinion, have contributed so centrally to the crisis facing the nation.”

That is why I thought the next logical step was the alliance model, and so in 2013 I wrote,

“When the (G)OP changed its rules after the Primaries to marginalize the TEA Party, by not even allowing Ron Paul's name to be put in nomination, it sealed its fate. Hundreds of thousands of "new blood" activists left that party. Three million less people voted for that party in '12 as in '08. The (G)OP lost a presidential race it should have easily won because it rejected the TEA Party activists and has new rules to make sure "we" never wrest control of that tax-eater party from its tax-eating establishment.

So we are left with several "Third Parties" that represent views "on the right' from Conservative to Libertarian.

I suspect, due to monopolistic political funding laws and regulations that erect "barriers against entry," it will not be possible to construct yet another new "major" (read: "tax-supported") party to challenge the (G)OP, so we need to consider how the existing political groupings can best move toward an electoral alliance.

I propose, not a new party, but rather an Independent Electoral Alliance. The Conservative and the Libertarian Parties have different strengths in different parts of the country. It should be possible to bring these parties together with joint candidates in some areas, leading to a joint presidential race in the future.” 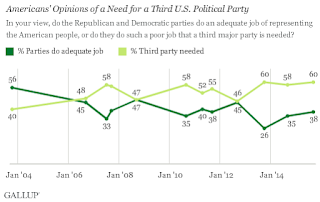 The third party trend has continued. In September 2015, Gallop noted, “Arguably, the U.S. political climate has been ripe for the emergence of a major third party for some time, but that hasn't yet happened.” [3] “Why?” one might ask.

That was before the Trump Election Reality Show and the perhaps not surprising disruptions of a “major party” political rally by protesters a couple days ago… in Chicago… for the first time since 1968. I do not know if Mr. Trump will succeed in his hostile take-over of the (G)OP, against the wishes of its management.

I strongly suspect that only an indictment could stop Mrs. Clinton from gaining the Demos nomination. She will probably be the next president, despite being unliked, untrusted, and suspected of corruption. She is, however, a big-government, big-spending, Big Pharma, Federal Reserve-protecting supporter of nearly every foreign intervention and every bailout, so quite acceptable to the political establishment. But, then again, so, to a significant extent are Senator Sanders, Senators Cruz and Rubio, and Mr. Trump. And he has shown willingness to use government force, under the evil Kelo Decision, for personal gain. Maybe he is not as anti-establishment as he appears on the Trump Election Reality Show. Though I do salute him for his principled stand against vaccine mandates, a strong anti-establishment position [http://tinyurl.com/InformedConsentPetition].

It appears every billionaire from Bloomberg to McAfee and beyond are threatening to run third party campaigns. It is rumored that billionaires Soros and the Kochs are each searching for suitable suits to be their front man or woman. They all smell an opportunity to extend their brands, with the stench of decay pervading the still-warm corpse of the (G)OP.

However, it won’t be that easy to translate their mega bucks into pollster inclusion, ballot position or national debate access. The restrictions built into the “controlled democracy” that America has become (from the limited, federal republic it was) make it very difficult to challenge the “two” tax-eater party political duopoly.

For example, the way the (G)OP rules were changed in 2012 will make it impossible for any “dark horse” candidate to be considered by the convention. Currently a candidate must have a majority (not just a plurality) of the votes in eight states to be eligible to have his name placed in nomination. And if not in nomination on the first ballot, there is no existing rule provision for new candidates to be included. That likely means a deadlocked (G)OP convention, with one side or the other walking out.

And not a moment too soon.

I thought, back in ’74, President Nixon’s abuse of power had finally kicked the corpse of the (G)OP the last time and that tax-eater party was going to go the way of the Whigs. Alas, not yet. The (G)OP had a couple more wars left in it after all… in cooperation with the Demos… and a couple more booms and their consequent busts (each getting bigger and bigger…).

The corruption of the “two party” political oligarchy has become so clear: the inability of the DC elite to deal with the Federal Debt and resulting collapse of the Dollar; the tragic failure to learn the lesson of endless foreign intervention (the lesson the that Founders’ policy of non-intervention is the only foreign policy consistent with a free republic) together are dooming the elite.

They know they face the abyss… and the “unwashed masses” they fear are the best armed civilians on the planet. Will DC send in the marines, or the heavily armed alphabet agency secret police forces? We suspect we know where the federalized police forces will stand. But where will the professional soldiers stand? Keeping their Oaths or against our liberties?

IMHO, the only way to save America from another civil war is to do exactly the opposite of what the elite did in 1860. DC must let go. DC must learn humility and humanity. Return the western lands to the states. Withdraw from the hundreds of unsustainable military bases around the world. Stop manipulating the money supply and interest rates. Stop spying on patriotic Americans. The elite must give up their false enterprise of empire.

It’s been a good empire for them. For the first time in American history the highest paid population communities are no longer the upper middle class suburbs around the main city market centers; rather, they are the counties directly surrounding DC, filled with its minions. The rest of the country is being hollowed-out; left to dry-up; allowed to decay.

For the first time in centuries the cohort of middle-aged white men (presumed to be the privileged) are not living longer than their fathers [4]. Consider that the USSR collapsed when Russian men in their prime were dying younger and younger.

“What is to be done?” Lenin famously asked. His answer, terror and dictatorship, is always the grasp of a failing elite. Nonetheless, his empire ate several generations of Russians and others victims before its final collapse. The American empire is in the midst of the beginning of a similar gluttony. But America, with so much more market-generated wealth than any of the socialist states, has a much greater way to fall. How is that to be done? There is only one political organization in America capable of standing toe-to-toe with the two party duopoly. The Libertarian Party, after 45 years laboring in the political vineyard, will be the only “other party” on the national ballot. The other “third parties” are well-meaning but really merely political clubs without significant ballot access that ought to rally around the libertarian candidate as the one hope to break the political deadlock.

The Libertarian Party [6] is the only logical choice, as it is the only uncorrupted party that will be on all fifty state ballots.

Former New Mexico governor, and private economy entrepreneur, Gary Johnson is its likely candidate. [7] Whether climbing Mr. Everest (he’s climbed the highest mountain on each continent) or building successful businesses, Gary is a different kind of American politician. Kind, respectful, intelligent. Proven tax and spending cutter. Strong voice for non-intervention and peace. Civil libertarian. Supports the end of the "drug war" and supports equal rights for LGBTs. He was known as “Gov. No” for his national record in vetoing spending, regulating and taxing bills.

When Senator Rand Paul, the only (now former) candidate who had any understanding of the real threats facing America sought to protect the Federal Debt Limit last October, to protect us from inevitable fiscal chaos by stopping the borrow-spend-tax-borrow juggernaut, all the other candidates, (G)OPers and Demos alike, including Cruz, Rubio and Sanders, voted to suspend the Federal Debt Limit until after the 2016 election, thereby voting for unlimited Federal Debt. They are the problem; they are not any solution.

The 2016 election may be the last best chance for the people of America to take back their government -- to restore the republic. Going forward, as more and more people come to depend on a failing government, the chance for change toward liberty becomes more remote; the inevitability of violent conflict unavoidable.

Unless the two party duopoly is broken, America cannot be fixed. 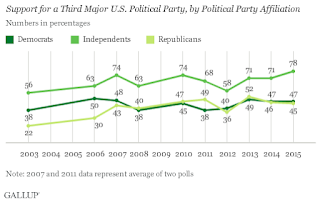