President Trump has issued an Executive Order, which is a form of legally-binding directive to the bureaucrats in the Executive Department, regarding Social Media and private censorship of Internet speech. 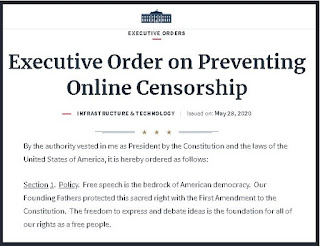 It has long been the position of the Internet service provider platforms that they are protected from liability for what their users post on their platforms or send through their services.

The Executive Order is here:
https://www.whitehouse.gov/presidential-actions/executive-order-preventing-online-censorship/

It provides, in part:


It is the policy of the United States to foster clear ground rules promoting free and open debate on the internet.  Prominent among the ground rules governing that debate is the immunity from liability created by section 230(c) of the Communications Decency Act (section 230(c)).  47 U.S.C. 230(c).  It is the policy of the United States that the scope of that immunity should be clarified: the immunity should not extend beyond its text and purpose to provide protection for those who purport to provide users a forum for free and open speech, but in reality use their power over a vital means of communication to engage in deceptive or pretextual actions stifling free and open debate by censoring certain viewpoints. {Emphasis added.]


In particular, subparagraph (c)(2) expressly addresses protections from “civil liability” and specifies that an interactive computer service provider may not be made liable “on account of” its decision in “good faith” to restrict access to content that it considers to be “obscene, lewd, lascivious, filthy, excessively violent, harassing or otherwise objectionable."

When carefully read, the Trump Executive Order does nothing new.

Section 230 of the 1996 internet statute does not exempt internet service providers from liability for censoring political opinion speech. I have argued that there is a legal basis for holding them responsible under the RICO and other laws. http://www.opensourcetruth.com/stop-the-bannings-sue-the-deep-state-corporate-shills/


The social media corporations are in law “creatures of the state” existing by virtue of the grant of the corporate franchise which permits such entities privileges that are not applicable to purely private persons, including the limited liability privilege and the privilege of selling shares to the public as a joint stock company, to profit from the use of the Internet Public Utility. While these companies appear, to some degree, as “private” businesses, they act over the Internet Public Utility. They act “under color of law” and are therefore more akin to government agencies than to private actors.

The law does, however, exempt those companies that profit from using the internet commons from liability for removing (censoring) a small category of speech from their platforms, including, for example, obscenity.

The normal way to interpret lists in statutes is under the rubric of "expressio unius est exclusio alterius" -- expressing the one excludes the other.  Where a list includes specifics and ends in a general term, as does section (c)(2), that general term is restricted by the specifics.

The service providers were never exempt from responsibility if they chose to censor political opinion (or any opinion) speech.  They can no longer hide behind a law that never protected them in the first place.

Expect litigation against the private censors.

And that is not a bad thing.
Posted by Health Freedom of Choice Blog at 9:30 PM No comments:

"The Police Power of the State is Not without Limits" The Governor of Kansas issued sweeping restrictions as part of a "lockdown" order predicated on the COVID-19 declared pandemic.  Those restrictions weighed more heavily on religious meetings than on other, secular, meetings.


"On April 18, federal Judge John Broomes issued a temporary restraining order against Kelly, finding that the churches were likely to prevail on their claim that her order violated the First Amendment rights of their parishioners 'to freely exercise their religion, including their right to attend worship services in their respective church facilities.' He brushed aside Kelly’s claim that her executive order treated religious institutions no differently than 'a large swath of both secular and non-secular behavior,' noting that the order expressly targeted churches to 'restrict religious activity.' Further, the judge observed, religious gatherings present no 'unique health risks' that could justify such discriminatory treatment. Kelly also tried to justify her actions by citing a 1905 U.S. Supreme Court decision, Jacobson v. Massachusetts, which involved a state law mandating smallpox vaccinations in the midst of a smallpox epidemic. But Broomes explained that 'even in such extreme cases as a public health crisis, the police power of the state is not without limits.'" - https://dailysign.al/3fq88Wv

I have long argued that Jacobson is not blanket authorization from the Supreme Court to mandate vaccines.  That argument is made in my General Brief in Support of Informed Consent, posted here:  https://tinyurl.com/GeneralBrief.  In Jacobson the Court stated:


“if it be apparent or can be shown with reasonable certainty that he is not at the time a fit subject of vaccination or that vaccination, by reason of his then condition, would seriously impair his health or probably cause his death"

In so far as Jacobson is used to justify forced vaccination, it is essentially old law, which does not take into account subsequent decisions. The Brief reviews those decisions, but two stand out.  One is Schloendorff v. Society of New York Hosp.,105 N.E. 92, 93 (N.Y. 1914) which held medical intervention without Informed Consent to be an assault and battery and the other is Missouri vs McNeely, 569 US 141 (2013)  wherein the Supreme Court stated:


Even a “…diminished expectation of privacy does not diminish the privacy interest in preventing a government agent from piercing the skin. And though a blood test conducted in a medical setting by trained personnel is less intrusive than other bodily invasions, this Court has never retreated from its recognition that any compelled intrusion into the human body implicates significant, constitutionally protected privacy interests”

Judge John Broomes should be honored as a member of the Federal Bench who understands the powerful notion that "the police power of the state is not without limits."  Among those limits are those imposed by the Constitution, especially the Bill of Rights as applied to the States by the 14th Amendment.

Posted by Health Freedom of Choice Blog at 11:22 AM No comments:

An Open Letter to Justin Amash: Speak Out for Informed Consent! 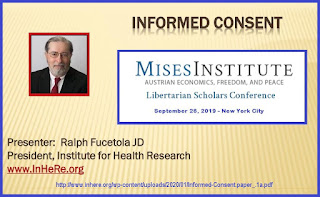 Justin Amash was a (G)OP member of the House of Representatives until he changed his party affiliation to Independent in 2019 and to Libertarian earlier this year.  He is the first sitting member of Congress to serve as a Libertarian Party member and has announced his candidacy for the LP nomination for President.  The LP is the only "third party" which will appear on all, or nearly all, state ballots this coming November.

The party's voter base has continued to grow.  See my previous blog entry:  https://tinyurl.com/OK2beLibertarian 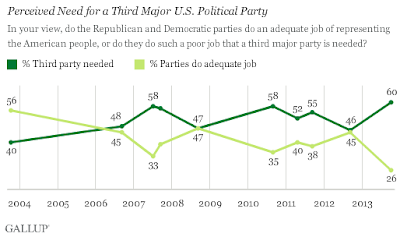 [Note: the 2016 total was greater than the difference between the two ruling parties.]

As my friend and mentor Maj. Gen. Bert Stubblebine reminded us four years ago, "Informed Consent is the defining issue of the 21st Century." In that context, I have written the following note to Justin Amash - contact@justinamash.com:


I am President of the Institute for Health Research - www.inhere.org - and presented a paper on Informed Consent at the Libertarian Scholars' Conference this past September at King's College, NYC.  http://www.inhere.org/wp-content/uploads/2020/01/Informed-Consent.paper_.1a.pdf

In cooperation with the Natural Solutions Foundation I am polling all presidential candidates regarding the universal right of Informed Consent and mandatory vaccinations.

If I do not hear from you within ten days I will assume that Rep. Amash does not support the right of Informed Consent and will so report.

Let's see how strong is the candidate's commitment to freedom... even during a time of declared pandemic.
Posted by Health Freedom of Choice Blog at 9:39 AM No comments: 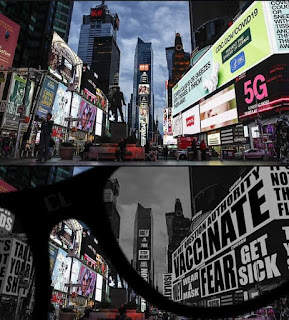 COVID MIND CONTROL
An Image After the Movie “They Live” [1]
Through Anti-Mind Control Sunglasses
Note COVID and 5G on the Top.
Which Image has the Mind Control Message? BOTH.
https://tinyurl.com/AVDcard

Get in line.Don’t get too close.Wear a mask.No one should see you smile.No eye-contact.You might get arrested if you play Frisbee in a park with your child.And certainly don’t visit a sick loved-one in hospital or hospice…

Trust the experts. The vaccine will save us. Then we can go back to normal. [2]
You get the message, don’t you?
This isn’t the first time “They” played the pandemic card. [3]
Are you old enough to remember the 1950s Polio Scares?  The 1976 First Swine Flu Panic (that vaccine killed 400; the flu killed no one)? The 2009 Second Swine Flu Panic — just ten years ago.  Led by Natural Solutions Foundation millions messaged Congress with “I Do Not Consent” emails and the vaxx mandates evaporated… no pandemic then either.
Did you know there was an Anti-Mask League headed by a doctor during the 1918/1919 Great Influenza Pandemic that killed 500,000 Americans; over a hundred million world wide? He told people masks did not help — it was better to breathe clean air and sunbathe than cower in isolation and fear.
Are you ready for the promised Second Wave? [4] When the economy gets shut down again, leading to food shortages and millions dead?
Are you awake yet?
Or has the mind control worked?