Song Review: By God We'll Have Our Home Again

By God We'll Have Our Home Again 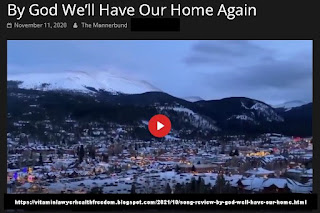 A battle march, By God We'll Have Our Home Again, penned in June of 2020, has captured widespread notoriety, becoming a rallying song of the Resistance.

Resistance to what? That varies from person to person.

Some see it as Resistance to tyrannical government, worldwide. Those governments are using public reaction to COVID-19, an overblown novel flu-like outbreak (with 99%+ survivor-ability), to impose unprecedented lockdowns and medical mandates, to the detriment of all but the elites.

These new Resisters see local economies destroyed by the lockdowns while elites reap every higher incomes and dominance.

They are beginning to realize that the inoculations and authorized "treatment" are far deadlier than the alleged disease. Some expect a "1346 Event" triggered by the escalating avalanche of adverse reactions being reported to vaccine reporting systems around the world. They are not alone in this; a number of respected holistic physicians are predicting just that.

What is a "1346 Event"?  That's the year the Black Death came to Eurasia.  Within two years between a third and half of the population was dead.  That is a real possibility now as well; perhaps a probability.  Such an event would fracture modern society and crash all trade and transport connections that make that society possible.  We see that starting in the supply chain problems of 2021.  The looming tyranny is the predicate for the collapse of both population and economy.

Others see the central threat as an imminent economic collapse, brought about by the globalist elite's use of "global climate change" or "overpopulation" or similar dystopian possibilities to grab ever more while ignoring the very real harm being done to people around the world -- the destruction of the world market and its potential for greater prosperity, replaced by restrictions and regulations intended to diminish humanity.  The opening images of the Song place it in just such a dystopian, very near, future.

Patriots in many nations, though, resist, setting aside their fears, planning to be part of the remnant that is willing to expend everything for a chance at a free future.  These good folk, in every land, are the Resistance.

They resist by gathering in cities, towns and villages around the world,originally every other month on Saturday morning and being together without masks, without "social distancing" and in solidarity and comradery. Over the past three months the demonstrations have become weekly.  Resisters are doing this by the dozens, the thousands and now even the millions (see: Melbourne, November 2021). Although ignored by the elite-controlled media, there is ample proof of a growing, world wide Resistance. [1]

Expressing oneself through voluntary association is an act of resistance. It is acting free in an increasingly unfree society.

The refrain "By God we'll have our home again" reflects the longings of a formerly free folk and their determination to retrieve their losses.

These words "By God we'll have our home again" bracket a series of complaints about the current situation, with declarations of strong intent to resist. "If there’s no fire to guide my way, then I will start my own."

Though it sounds like it could have been written several centuries ago, perhaps in Scotland or the Old South, it was written during the Year of the Declared Pandemic -- in Middle America.

This version has strong visuals and the website hosting it expresses some opinions with which I disagree (and some with which I agree). I'm sharing this song for itself alone, as a self-contained, heartfelt message, not necessarily for this particular version's surroundings.

The message is clear, "By blood or sweat..." unless we resist, there is no hope.

A wise friend once told me "The side with the best songs wins."  One can only hope.

When there’s nothing left but the fire in my chest
and the air that fills my lungs
I’ll hold my tears and trade my years
for a glimpse at kingdom come.
On the other side of misery there’s a world we long to see.
The strife we share will take us there to relief and sovereignty.

In our own towns we’re foreigners now, our names are spat and cursed.
The headlines smack of another attack, not the last and not the worst.
Oh my fathers they look down on me, I wonder what they feel
To see their noble sons driven down beneath a cowards heel.

The way is dark, the road is lost, my eyes they strain to see.
I struggle forth to find a friend to light the way for me.
Oh brothers can you hear my voice or am I all alone?
If there’s no fire to guide my way, then I will start my own.

[1]Here is a video compilation from two months ago.  Freedom gatherings have continued to expand since then:   http://www.opensourcetruth.com/be-inspired-video-of-world-wide-demonstration-4/

Posted by Health Freedom of Choice Blog at 10:51 AM No comments: