We fought hard to exempt Dietary Supplements from the unnecessary, misnamed 2011 "food safety" (really Federal Food Monopolization) law*. Others told us not to bother since Dietary Supplements were not even named in the law. We knew better and one Push Back weekend of 150,000 emails to the members of a certain Congressional Committee kept the Dietary Supplement Exemption in the bill; further Push Back effort kept the exemption in during the House/Senate Conference and the provision was enacted, reading:


21 U.S.C. 305(d) Rule of Construction.--Nothing in this section shall be construed to affect the regulation of dietary supplements under the Dietary Supplement Health and Education Act of 1994 (Public Law 103-417).


This remains the law, although FDA showed, with its unlawful banning of a certain form of Vitamin B-6 a year later that it was willing to ignore the explicit order of Congress.

Another part of the 2011 law let FDA charge unspecified fees for reinspecting food facilities. Starting last December and continuing as recently as last month, FDA began including the following language in its warning letters to Dietary Supplement label-owners:


"Section 743 of the Act (21 U.S.C. 379j-31) authorizes FDA to assess and collect fees to cover FDA's costs for certain activities, including reinspection-related costs. A reinspection is one or more inspections conducted subsequent to an inspection that identified noncompliance materially related to a food safety requirement of the Act..."
(Emphasis added.) http://www.fda.gov/ICECI/EnforcementActions/WarningLetters/2012/ucm339936.htm


The Congressional intent was clear, although obscured when the Exemption Section was oddly codified in section 305 which is about inspecting foreign food facilities. The intend was to exempt Dietary Supplements from the new, very strict, "food safety" rules.

FDA has a history of ignoring Congress and legal restrictions, prompting many Court decisions against FDA assertions of power. It was former Congressman Ron Paul who opined that giving more power to FDA was giving it "more power to abuse..."

The agency is at it again, this time seeking to impose a bureaucratic "tax" on companies when they are reinspected. Since the Obama Administration has rapidly increased the number of inspections and reinspections we can expect this new fee to become a significant burden on small and start-up companies. More crony corporatist monopolization.

In my humble opinion, the FDA is barred by law from imposing reinspection fees against DSHEA regulated Dietary Supplements.

The question is, will the industry assert its rights under the law or just allow yet another usurpation by this most overreaching of the Federal "alphabet agencies?"

One thing each Dietary Supplement label-owner MUST do is to make sure "your papers are in order..." so there is no excuse for a reinspection.

See my site at: www.VitaminIndustryCompliance.com 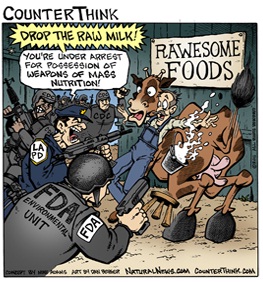