FRANKEN-APPLES COMING TO A STORE NEAR YOU?
Push Back Here: http://tinyurl.com/No2GMO 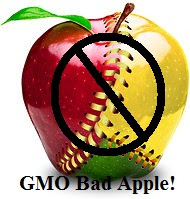 Congress About to Mandate GMOs?
The countries that follow the Civil Law tradition of the Napoleonic Code apply the Precautionary Principle to new products entering the marketplace. The marketer bears the burden of showing the safety of the product. In the Common Law countries, like the United States, the same concept, that the purveyor takes responsibility, is called “Strict Liability in Tort.” You are responsible for the safety of the products you introduce into commerce.

That laudable principle, however, fails to be followed in several key areas — notably, for our purposes here, regarding Genetically Modified Organisms (GMOs).

First, what is a GMO? It is not a plant or animal that is the result of selective breeding or hybridizing closely linked species. Rather than these methods, used for millenniums, GMO technology is all about the introduction of “alien” DNA into species, to “give” them traits they did not develop in nature. Such “chimera” or transgenetic entities are really new species, sometimes combining animal and plant DNA. Often producing novel proteins for which the human body has no evolutionary experience.

We do not know what “unintended” consequences may develop. There are however, disturbing reports coming from many sources (just GOOGLE “GMO risks”) warning about  among animals fed GMO feed and failures of mono-culture GMO crops when stressed (consider the looming failure of the GMO corn crop in the USA this year).

See the previous posting:
GMO Corn Crops Failing in the USA: Famine to Follow?
http://www.healthfreedomusa.org/?p=12413
We find ourselves particularly concerned with the “Farm Bill” pending before Congress. We prefer to call it the “Factory Food Promotion Bill” since it just continues the “bipartisan” policy of heavily subsidizing factory “phude” production while building in new burdens on local, sustainable, organic production. In addition, it includes provisions that would mandate even greater GMO penetration of the market, without labeling.

“Three sections (10011, 10013, and 10014) tucked into the middle of the bulky bill work together to eliminate any real review of GE crops. This “Monsanto Rider” got its name from the corporation with a choke-hold on most of the country’s staple crops”

To our minds, if a company is putting something on the market that it claims is “food” it has an obligation to tell us in what way it is “food.” If it is a transgenetic chimera, a novel species with unknown risk, the public ought to know. Now the “bipartisan” policy enforced by FDA does not required GMO labeling and acutally forbids “GMO-Free” designations. However, we feel confident, if FDA ever takes any company to court because it truthfully labeled its food as “GMO-Free” the FDA would lose.

What can you do about the risks of GMO fake “phude?”

There are several steps:

1. Help us educate decision makers about GMOs!
Easily email your legislators here: http://tinyurl.com/No2GMO2. Insist that “natural” food purveyors such as Whole Foods and Trader Joe’s take responsibility and indicate which products are GMO-Free. Your dollars count!
3. Source as much of your food as you can from Deep South (South America and Africa) sources that are Organic, GMO-Free and Low-Radiation certified. See:www.FriendlyFoodCoOp.org
4. Grow your own heritage seed, real food in your own garden (indoors if you are in a radiation risk area).

We are not helpless in the face of the crony corporatist factory “phude” system. Together, our Dollars and our Push Back can make a difference!

Act right now! http://tinyurl.com/No2GMO
General Bert Stubblebine (US ARmy ret; President of the Natural Solutions Foundation) has identified four technologies that he calls the “Genomicidal technologies that are weaponizing the world against human survival.”

These are [1] the uninsurable risks of nuclear power;
[2] industrial toxins in the environment;
[3] drug toxins, especially those in the uninsurable risk of vaccines; and, of course,
[4] GMO fake “phude.” He has further identified the resulting harms as furthering the Global Elitist’ Depopulation Agenda.

This is what Natural Solutions Foundation medical Director Rima E. Laibow, MD has identified as the “Globalist Genocidal Agenda” See Dr. Rima on that topic at the School of Enlightenment:

Just posted this message to the Tea Party:

I admit I've been a supporter of Ron Paul ever since the days of the National Committee to Relegalize Gold in the mid 1970's. The restoration of our right to own gold bullion was one of Dr. Paul's first victories for Liberty.  I even changed my voter registration from Libertarian to Republican in '08 at his suggestion.
I left the GOP in '69 although I was one of the Young Republicans being groomed for office in NJ, and focused on issues, like the Taxpayers Freedom Movement of the 70's and 80s and the Health Freedom Movement thereafter. In my mind the GOP was hopelessly tied to the very Federal power that was destroying the Constitutional Republic.

The behavior of the GOP in recent years has done nothing to convince me otherwise. In fact, after the Tea Party gave the GOP control of the House in '10 nearly the first thing the majority did was betray us by abrogating that body's control over the purse strings, by raising the Fed Debt Limit yet again, triggering the downgrade of US credit rating.

The one hope I had for the GOP was Dr. Paul's candidacy. While his efforts have broadened and deepened the organizational structure of the Movement to Restore the Constitutional Republic, the GOP establishment has proven willing to go to almost any lengths silence him and to find "Anybody but Paul" -- even some Tea Partiers  seem more anti-Paul than pro-Liberty, gleefully taunting the Liberty Movement while urging the Tea Party to become nothing more than an adjuvant to the GOP.

The Tea Party is not itself a political party. It is also not a branch of the GOP. Our interest in achieving the restoration of the Constitutional Republic is not the same as the GOP establishment's interest in governing.


We need to be politically sophisticated enough to "play" the GOP to achieve our Core Values: the Constitution, Fiscal Responsibility and Free Markets.

IMHO, in this election cycle, the best way to do that is to support Gov. Gary Johnson, the Libertarian Candidate, for President.  He also now perceives the GOP as a barrier to achieving Liberty and has taken on the task of representing our views to the nation.

In this election cycle, Obama is the International Social Fascist and Romney is the typical crony corporatist who is quite comfortable doing business with any of the various flavors of social fascism.
"Social Fascism" is the alliance of crony corporatists and "community organizers" in support of the globalist elite depopulation agenda.

[Note, IMHO, if Ron Paul gets to the podium in Tampa it would give him a useful pulpit from which to continue the campaign for liberty. That would be very good for the Tea Party.]

I urge the Tea Party to consider if candidate Gary Johnson polls high enough in the national polls he gets into the presidential debates.

It would be really interesting to watch Romney and Obama blah blah blahing while "Governor NO!" explicates the patriot agenda of restoring the Constitutional Republic.

The best Tea Party strategy would be to loudly support Gov. Johnson so that he polls above the required percentage and gets in the debate.


Johnson in the debates would force Romney to move to the "right" and would expose the current White House occupant for the Marxist he most certainly appears to be.

I realize that some of Johnson's libertarian positions might not resonate with all Tea Partiers, but, frankly, when faced with a choice among the community organizer, the crony corporatist or the libertarian, the social conservatives among us need to grit their teeth and get political.

So I say, publicly support Gary Johnson, even if, on election day you still feel compelled to vote for Romney as the (slightly) lesser of the two evils!


We still need a strong voice for Liberty in the campaign! Johnson is the only Liberty candidate who will be on all 50 State ballots.

What does the Tea Party say?

Posted by Health Freedom of Choice Blog at 9:31 AM No comments: