While thousands of families stormed Trenton and successfully stopped the State Legislature from abrogating long-standing religious conscientious objections to forced vaccination this past week, at the same time the same legislators did adopt two bills that take New Jersey a long way toward medical tyranny.


First, it quietly passed an anti-free speech Dietitian Licensing Law which monopolizes all speech about nutrition in the hands of state-licensed dietitians. That is bill A1582/S2625.
The last time the State Legislature did this was in 1994, and that was just a certification law, not a mandatory licensing law. Then Governor Christie Todd Whitman vetoed the Bill saying that it would not offer further protection to New Jersians.
This new dietitians’ monopoly bill clearly seeks to control speech, and specifically speech about health and wellness, as well as speech about what people eat, a matter impressed with significant privacy interests. This law suppresses speech about health and food. It may also violate Federal Anti-Trust law; see: https://regproject.org/paper/state-licensing-boards-antitrust-innovation/
Second, at the same time the State Legislature sent a new health care worker forced vaccination bill to the Governor as well. That bill is A1576/S1003. The bill allows for no religious conscientious objections to the flu vaccine, although that position violates Federal law, which requires employers to accommodate workers’ religious beliefs. This law forces workers to remain silent and not express their lawful refusal to give Informed Consent to “unavoidably unsafe” vaccines.
Both bills being sent to the Governor violate Informed Consent, free speech and privacy.
Federal law is very clear with regard to the Right of the People to Truthful Health Information. That is at the heart of the First Amendment. The 2002 case of Thompson v Western States (535 U.S. 357) explicitly deals with efforts by government to control speech about health. Justice O’Connor, writing for the majority stated:

“If the First Amendment means anything, it means that regulating speech must be a last – not first – resort… We have previously rejected the notion that the Government has an interest in preventing the dissemination of truthful commercial information in order to prevent members of the public from making bad decisions with the information.”

We now therefore call upon Governor Murphy to veto these bills as they tend toward creating monopolies, violate free speech, and deny New Jersians access to valid information about vaccination and nutrition. They increase health care costs.
New Jersey needs freedom of choice in health care, not new restrictions passed in near secrecy during the rush to adjourn for the Holidays.
Governor Murphy, do not give Big Pharma lobbyists control over our health care workers and our nutritionists! Just say “NO!” and give us the gift of freedom.
Contact Gov. Murphy Here
https://nj.gov/governor/contact/
609-292-6000 / constituent.relations@nj.gov

Posted by Health Freedom of Choice Blog at 6:39 PM No comments: 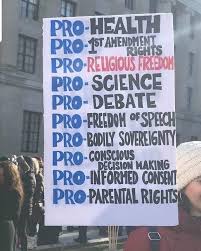 UPDATE NOTE:  The Bill failed to pass the State Senate on Monday, January 13th by one vote; the Bill previously was "pulled" from the Senate floor on 16 December 2019 as there were not enough votes to adopt it.  After the failure to pass on January 13th a new version of the Bill has been introduced for the new Session of the Legislature.  Continued pressure is needed to kill this vicious Bill permanently!

New Jersey Senate Bill 2173 would abrogate long-standing religious conscientious objections to mandatory school vaccination. The New Jersey legislature thereby joins with other "Blue State" legislatures, such as California and New York, to adopt coercive laws implementing a "zero tolerance" rule for childhood vaccination. This action was taken only after the State Senate majority leader had to remove his own party members from the Health Committee to engineer the committee majority vote in favor of the bill.

The Bill violates long-standing law regarding conscientious objections to vaccination even though our courts have held vaccines to be "unavoidably unsafe." The universal right of Informed Consent tells us that where there is risk there must be choice. This basic principle of international law is being unlawfully overridden by the legislature.

Recently the United States Supreme Court has clearly declared, even a “… diminished expectation of privacy does not diminish the… privacy interest in preventing a government agent from piercing the… skin. And though a blood test conducted in a medical setting by trained personnel is less intrusive than other bodily invasions, this Court has never retreated from its recognition that any compelled intrusion into the human body implicates significant, constitutionally protected privacy interests…” Missouri vs McNeely, 569 US 141 (2013)

An earlier Supreme Court declared that the courts are “not without power to intervene… if it be apparent or can be shown with reasonable certainty that he is not at the time a fit subject of vaccination or that vaccination, by reason of his then condition, would seriously impair his health or probably cause his death.” Jacobson v. Commonwealth of Massachusetts, 197 U.S. 11 (1905)

What the legislature fails to understand is the depth of commitment by those citizens who reject vaccination as pseudo-science which is causing mass, well documented harm to thousands of children. The risk heavily outweighs any supposed benefit from "piercing the skin" with unavoidably unsafe toxic brews. These parents are ready to refuse to obey coerced vaccination laws. Never before in American history have citizens been subjected to this level of massive social control over the health of their children.

The Bill has a number of very questionable provisions. These include:

1. Abrogating religious conscientious objections although the First Amendment protects religious belief and action. Parents will be forced to submit to an unconstitutional condition: be coerced into remaining silent although opposed to vaccination or have their children denied their state constitutional right to a thorough and efficient education.

2. Creating a government-controlled Immunization Registry of all children and their vaccine status. This is clearly a violation of basic privacy rights and would enable government seizure of children from vaccine resisting families.

3. Unlawfully discriminating between religious conscientious objections to vaccination versus objections to other medical interventions, where the Bill states: "Section 5c. Any rule or regulation involving physical examination [, immunization] or medical treatment other than immunization shall include an appropriate exemption for any child whose parent or parents object thereto on the ground that it conflicts with the tenets and practice of a recognized church or religious denomination of which the parent or child is an adherent or member." This provision acknowledges the right of conscientious objection to all medical procedures except what is termed "immunization" although there is no scientific agreement that injecting toxic brews into children actually provides any immunization. Further, the legislature has no power to decide what religious beliefs are "recognized."  This is clear violation of the First Amendment.

4. The law, in Section 6(1) a, restricts licensed physicians as the learned intermediaries from freely expressing their professional opinions regarding whether a particular child is a fit subject for vaccination by requiring the expression of all medical exemptions to confirm to one particular Federal Government Agency (ACIP) listing of allowed adverse reactions, although another Federal Government Agency (IOM) has documented literally hundreds of additional dangerous adverse reactions.

This Bill, if it becomes law, is clearly subject to challenge in the Courts.

While the science is not settled, vaccines are proven unavoidably unsafe and are an uninsurable risk.

It is unconscionable for the State of New Jersey to join with a few other states in violating the basic rights of their citizens. Among the six vaccine-coercing states are the two with both the most draconian vaccine laws and the lowest childhood health record, Mississippi and West Virginia. The other vaccine-coercing states of note include both California and New York, states where thousands of citizens are leaving to protect their children from the unproven and dangerous reality of mass, multiple vaccination.

The mad-vaxxers are acting in such a cavalier manner because they are increasingly aware that opposition to forced vaccination will simply not disappear -- we will not continue to sacrifice our children on the altar of Moloch!

Posted by Health Freedom of Choice Blog at 11:13 AM No comments: