Health Care, the Fiscal Cliff and Your Survival


What can you do to protect yourself from the Fiscal Cliff and the resulting hyperinflation? We have established the Fund for Natural Solutions, an SEC-filed Reg. D private equity fund to help you bring your values and assets together. No offer may be made except through the Private Placement Memorandum, available upon request through http://www.FundforNaturalSolutions.org .

http://forms.aweber.com/form/83/1135592583.htm
Even if the health care system moves toward a "single payer" socialized system, the the assurance of equally decrepit health care for all, it highly querstionable whether the Federal Establishment can ever afford to maintain anything like the level of health care Americans have come to expect as an entitlement.

No doubt "rationing" of standard health care will become the norm. No doubt older folks will not live as long as they might...

So can the Federal Establishment ever meet the obligations it has taken on without lots of baby boomers dying before their time?

And what does that figure really represent?

In reality, we value (Federal Reserve fiat) dollars in terms of gold, rather than gold in terms of fiat dollars.

For example, a barrel of oil costs about as much in gold now as it did decades ago. In fiat dollars, that price has gone from $.25 per gallon when I started driving to, during Sandy here in NJ, about $6, if you could get it. The debt is the driving force behind the Fiscal Cliff and the looming collapse of standard health care. How can that debt be managed? A few years ago Switzerland converted 1,500 of its 4,500 tons of gold to fiat dollars and paid off its entire sovereign debt! The Smart Swiss are (sovereign) debt free! What would it take for the USA to do the same?.

So the question would be, at what nominal fiat dollar price will the US govt's gold "clear the market" for Federal Debt? If you divide the $16T debt by the 8,000 tons of gold, you get a bit over $50,000 to the ounce of gold. 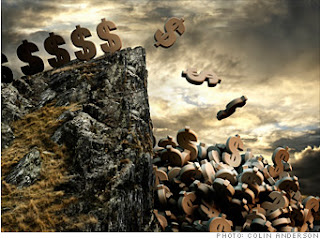 The Founders saw the Continental Dollar go from one paper dollar equaling one silver dollar to about 1,000 to one. In the past century we've gone from 20 Federal dollars buying an ounce of gold to over 1,700 needed to buy an ounce of gold.

Will the price of gold in terms of fiat dollars escalate further? Certainly. And, if hyperinflation is engineered in a desperate attempt to keep the banking bubble going, $50,000 to the ounce may seem cheap.

The Zimbabwe hyperinflation didn't end a couple years ago until the central bank ran out of harder currencies to the point where it couldn't buy the paper and ink to print its paper.

The people who will be running the Fed and the Treasury, and their laughable "overseers" in Congress, have no economic understanding that would lead them to any other endgame.

What can you do to protect yourself from the Fiscal Cliff and the resulting hyperinflation? My co-trustees at Natural Solutions Foundation, its President, Maj. Gen. Bert Stubblebine (US Army ret.) and Rima E. Laibow, MD have joined with me to establish the Fund for Natural Solutions, an SEC-filed Reg. D private equity fund, to allow you to bring your values and assets together. No offer may be made except through the Private Placement Memorandum, available upon request through http://www.FundforNaturalSolutions.org .

Posted by Health Freedom of Choice Blog at 9:46 PM