The Empowered Fear the Powerless

A specter haunting
America and its skull
Wears a tricorne hat. 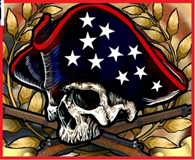 The Empowered Fear the “Powerless”

A specter is haunting[1] America, wearing a tricorne hat.

We must never forget the horrific wars of the Twentieth Century (the "American Century") during which socialist states, such as Nazi Germany, the Soviet Union and Red China, killed over a hundred million disarmed men, women and children. American might stood firm and humanity thought there would be a respite during the new millennium, when the never-to-be-lamented USSR collapsed and Red China was forced to allow market forces which raised the living standards of a quarter of humanity, despite the false ideology the CCP continues to profess.

That respite was short lived as a renewed global “Empowered Elite” arose from the very successes of the triumphant global capitalist market. Those newly “woke” Empowered value power so much that they are willing to use any claimed crisis to achieve one goal:  global central planning to “rationalize” the unpredictable results of the worldwide free market. Control is the goal of plutocrats and bureaucrats alike.

However, consider that today there are more scientists and engineers working on this planet than the total population of just a few centuries ago.  Consider the accelerating pace of innovation and change.  We are ever closer to that ‘singularity’ when technological change happens at an ever faster pace. Unpredictably.

Those Empowered who believe they rule the world are afraid of innovation.  Change is a threat to their sinecures and their government-guaranteed profits.  Their corporations and institutions are at risk when human action brings about new associations, inventions, structures and concepts.

How are the Empowered likely to respond?

The obvious choice of these “elites”, as expressed through their governments, international agencies and “nongovernmental” organizations, is to frighten people with horrifying tales of ersatz global environmental catastrophizes or pseudo-pandemic diseases.  Then, there’s always a war or two...

Fear is followed by tyranny.

Yet for every action there is an opposite reaction. Their attempt here is to reverse the past three hundred years of greater freedom; centuries during which the tyrannies of chattel slavery, government-controlled religion and belief, the “legal infirmities” of women, and government trade monopolies were all abolished, after millennia of subjugation and repression.

And it certainly looked as though they were succeeding in reversing centuries of progress (in the name of “progressivism” – as usual, reversing meanings to hide the one vital question:  who benefits?).

Then, after a year of lockdowns, meaningless masking and dangerous vaccine mandates people began to resist.  The “woke” attempt to break the open society and the nuclear family went too far...

Starting in March of 2021 a series of World Wide Demonstrations developed.  At first, every other month on the third Saturday. In March people in 90 countries and 150 cities demonstrated; in May a 150 countries and 300 cities; in July, nearly every non-totalitarian country, hundreds of cities. Then people started demonstrating every Saturday, in thousands of cities and towns. Then truckers formed caravans demanding a return to an open society.  We saw a hasty retreat by the Empowered as lockdowns and masking disappeared and as cracks formed in the vaccine mandates; and so the resistance continues. People are becoming aware of the threat to our universal right of Informed Consent. Similarly tens of thousands are joining local political party committees, while irate parents are attending schoolboard, library and council meetings in unprecedented numbers.

People are rising up against Empowered Tyranny.

Throughout the world, and especially in Europe and the English-speaking nations, there is a growing uprising by men in the prime of life who are viewed by the Empowered as powerless and unnecessary to consider. They are the “deplorables”. Men’s groups, active clubs, fathers’ groups and the like are becoming politicized. Men seek to protect their spouses and children.  They seek to protect their livelihood.

At the same time the mothers of the world are rising up, to protect their families and children.  The World Wide Demonstrations bring together all liberty-loving people, demanding freedom of choice and Informed Consent. 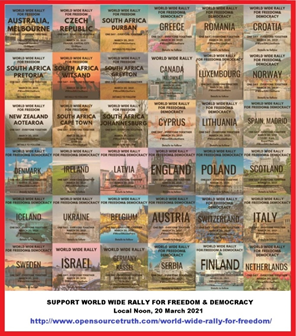 But it may very well be the numerous men’s groups, arising throughout the Western World pose the greatest threat to the Empowered, and thus the greatest hope for humanity.

It is the specter of a newly awakened masculinity that most frightens the Empowered.

This return to manliness is against a background of severe depletion of testosterone levels among many Western men, caused by feminizing hormones in the environment, and as recently revealed, by certain “vaccines” that have been mandated in direct violation of Informed Consent.

What are these men’s groups?

They are independent fraternities in the original meaning of the word: brotherhoods.  The ancient bonds of brotherhood among men in towns and rural communities, where the members of the “Mannerbund” (men’s group) helped each other in various ways: by “raising” a barn or responding to the “hue and cry” to defend the community from invasion or wrong-doing, or otherwise acting from their common bond.

Sometimes such groups have an overt political quality: consider the Sons of Liberty of the 1760’s for example: drinking clubs that sparked a revolution.  Other times they have a religious quality, and there are many such confraternities. The Masons and Shriners can be considered as hybrid groups.

So can the Democrat Party’s thugs, once the white-hooded KKK, more recently the black-hoodied BLM. The (G)OP, America’s other ruling party, is not much better. Except for the Greens and Libertarians no American political party supports the universal right of Informed Consent.

In the past decade there has been a growth of voluntary associations among working family men in the United States; among plumbers, electricians, craftsmen, contractors, builders, among others.  An example is the Proud Boys, with their nearly libertarian, explicitly pro-free speech, anti-racist and pro-free market beliefs (all adult men are welcomed, regardless of ethnicity, race, religion or adult sexual preference).

Throughout especially Eastern Europe and North America, and to a lesser extent Australia and New Zealand, younger men are forming “crews” or Active Clubs where they mix nationalist ideals with physical training, including hiking, mountaineering, boxing, wrestling and the like. They are bonding as men in a society that denigrates their capacities. They engage in what some have called “tribe and train” forging bonds of mutual respect.

“Tagging” walls, posting stickers, or “banner drops” (holding flags and banners with slogans on bridges over busy highways) and the use of social media to spread their ideas is an integral part of the activities of such groups. Many are attracted by the strong ties of brotherhood that collaborative human action engenders.

We are at the start of a growing revolution, the results of which we cannot yet predict. What can be said is that a growing number of men are collaborating with the goal of reasserting their natural liberty. 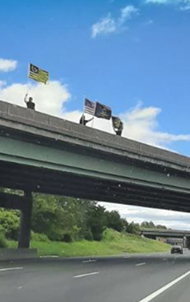 [1] Marx and Engels used this phrase to describe the threat of Revolution in the 1848 Communist Manifesto; V. Haval use the same phrase to begin his 1979 critique of Communist power in Eastern Europe, The Power of the Powerless.  Here we refer to the uprising, primarily of Western men, resisting the Global Socialist Tyranny which certain corporate, government and academic empowered “elites” seek to impose.

Posted by Health Freedom of Choice Blog at 1:21 PM