School children in California are not the only victims of the Mad Vaxxers. Health Care Workers are being told they "must" receive vaccines, usually especially the failed Flu Vax, [1] or they will lose their jobs. Children, especially in California, are being faced with the unlawful choice of a "free public education" or vaccine freedom of choice. 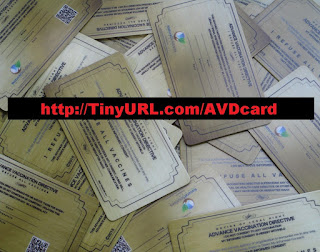 
That is not the law.  Rather, the individual right to Informed Consent overrides any employer mandates. This was acknowledged just a couple years ago in my home state, New Jersey, by an Administrative Law Judge in a unemployment insurance case, where a nurse, refusing vaccines for philosophic as opposed to religious reasons, was held to have been unlawfully fired. [2]

A similar argument can be made with regard to childhood vaccine mandates. This blog entry focuses on employment issues, but many of the same concerns should invalidate any vaccine mandate, no matter who may proclaim it or against whom it may be directed.

We must acknowledge that the national political authority (in the USA, the FDA) seeks to "privatize tyranny" [3] by having heavily conflicted (in the USA, CDC) approval committees "recommend" vaccines which then become mandated by local government, school and work authorities. As such, this nominally private actors are acting "under color of law" and must abide by all constitutional restrictions.

It is the nature of the universal right to Informed Consent that you must assert the right or it may be deemed waived. However, if asserted, the right is viable, as the US Supreme Court stated in 2013 [4]

Even a “…diminished expectation of privacy does not diminish the… privacy interest in preventing a government agent from piercing the… skin. And though a blood test conducted in a medical setting by trained personnel is less intrusive than other bodily invasions, this Court has never retreated from its recognition that any compelled intrusion into the human body implicates significant, constitutionally protected privacy interests…”


It is further the case that US Federal Law requires employers to reasonably accommodate workers' religious beliefs (so, for example, it has long been illegal to make Jews work on the Sabbath).

With these circumstances in mind, and with wonderful information posted at the Living Whole blog [5] I drafted the following suggested language for workers to include in their request to an employer to honor their exemption from vaccination.

You can further assert your right to Informed Consent with the Advance Vaccine Directive Card, available through Natural Solutions Foundation. [6]

When employers, school administrators and others are "acting under color of law" to enforce government or private regulations, they are bound by the civil rights laws to accommodate sincere, personal religious (or equivalent philosophical) scruples.

Here is the language I suggest:

I am seeking a Religious Accommodation in the form of a Religious Exemption from Immunization because of my strongly held personal religious belief that Immunization is against my single most sincere religious belief. That belief is that I am free to worship my God as I see fit as without prejudice as afforded to me by the Laws of the United States of America.

You will accommodate me in the workplace with a Religious Exemption From Immunization.

The Law supports my position on the matter, including:

1st Amendment – “Congress shall make no law respecting an establishment of religion, or prohibiting the free exercise thereof” - https://www.google.com/search?q=1st+amendment+&ie=utf-8&oe=utf-8

201. (a) All persons shall be entitled to the full and equal enjoyment of the goods, services, facilities, and privileges, advantages, and accommodations of any place of public accommodation, as defined in this section, without discrimination or segregation on the ground of race, color, religion, or national origin.

SEC. 202. All persons shall be entitled to be free, at any establishment or place, from discrimination or segregation of any kind on the ground of race, color, religion, or national origin, if such discrimination or segregation is or purports to be required by any law, statute, ordinance, regulation, rule, or order of a State or any agency or political subdivision thereof.

Forcing me to defend my Religious Conviction for a Religious Exemption or that I do not meet some imaginary preconceived religious threshold is proof that you are being prejudiced against me and you are thus seeking to segregate from public access and from gainful employment.

Any attempt to force me to believe as you do is to proselytize me from my religion into your belief system. May I remind you that it is illegal for you to force your religion on me in as much as I can not force mine on you.

“The Religion then of every man must be left to the conviction and conscience of every man; and it is the right of every man to exercise it as these may dictate. This right is in its nature an unalienable right. It is unalienable, because the opinions of men, depending only on the evidence contemplated by their own minds cannot follow the dictates of other men: It is unalienable also, because what is here a right towards men, is a duty towards the Creator. It is the duty of every man to render to the Creator such homage and such only as he believes to be acceptable to him.”

In closing, Attorney General Jeff Sessions said this on June 6, 2017

“Religious liberty is not merely a right to personal religious beliefs or even to worship in a sacred place. It also encompasses religious observance and practice. Except in the narrowest circumstances, no one should be forced to choose between living out his or her faith and complying with the law.”

The Attorney General Continues, in Point 2

“2. The free exercise of religion includes the right to act or abstain from action in accordance with one’s religious beliefs.

“The Free Exercise Clause protects not just the right to believe or the right to worship; it protects the right to perform or abstain from performing certain physical acts in accordance with one’s belief. Federal statues, including the Religious Freedom Restoration Act of 1993 (“RFRA”), supports that protection, broadly defining the exercise of religion to encompass all aspects of observance and practice, whether or not central to, or required by, by a particular religious faith.”   https://www.justice.gov/opa/press-release/file/1001891/download

To Allow a Religious Exemption for one religion and not for my religion is to show you are prejudiced against me.

Whether or not Immunization is central to, or required by any religious group with which I may be associated is irrelevant in this matter because for me to go against my religious belief is a sin.

To deny any and all religions (or philosophies that hold the same position in a person's life as a religion) of a Religious Accommodation, or to allow one religion or philosophy an exemption over another is a violation of my civil rights protected by the Constitution, statutory and case law, and is tyranny!

This is a total Violation of my Inalienable Right to be free to worship, and abstain from the physical act of Immunizations. Employers are required by Federal and State law to accommodate my religious belief.

I am choosing to abstain from Immunizations because it is against my Strongly Held Personal Religious Belief.

I do not give Informed Consent to any vaccination.

The correct ICD-10-CM Code that applies is Z28.1 “Vaccination not carried out for religious reasons.”

I certify that the above statements are true and accurate to the best of my knowledge and belief.

Thank you so much for this. I am currently in situation with the health dept I work for wanting me to be vaccinated. This is very helpful. I am so thankful to have found this as well as livingwhole.org. God bless!

Hello,
Do you know if this letter has worked for health care professionals? I need to submit mine to HR and want it to be perfect.